An Overview of RF Energy Harvesting – Working and Applications 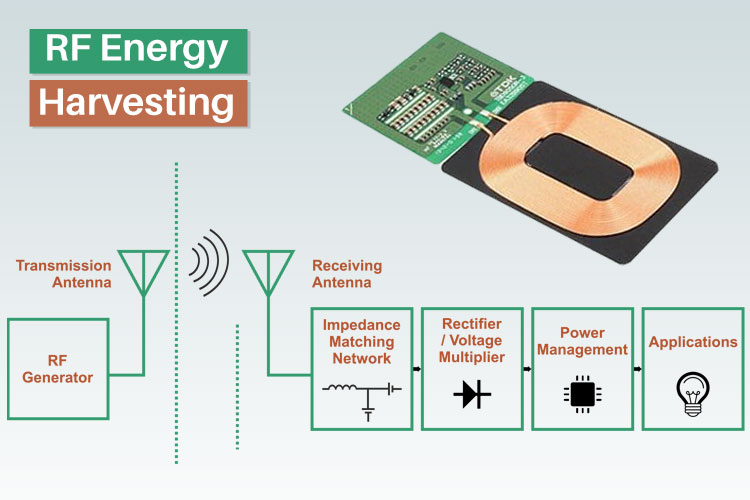 Radio Frequency (RF) Energy Harvesting is a form of a wireless power transfer technique where the received RF signals are converted into electricity. It is also known as RF power scavenging. RF energy harvesting device can provide a powerful solution to wireless devices by enabling them to harvest energy from the RF signals which are available in the environment. RF Energy Harvesting is implemented in various applications including, wireless sensor networks, wearable devices, wireless charging, and IoT. 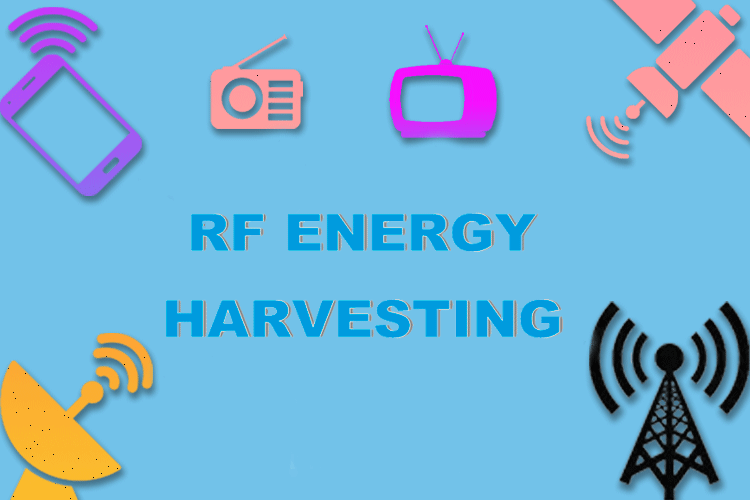 The history of RF energy/power harvesting originated in the late 1950s with a microwave-powered helicopter. Nowadays, this technique is seen as a promising replacement for small batteries in low-power electrical devices and systems. Batteries have various drawbacks such as size, limited energy storage, and inefficient extraction of the stored energy. A majority of batteries end up in landfills and cause both land and water pollution. RF energy harvesting helps to reduce the dependency on batteries, which will ultimately have a positive impact on our environment.

RF waves in our environment come from various sources such as radio stations, wireless internet, and satellite stations. An RF energy harvester system has two key components. An antenna to capture the RF waves and convert them into AC voltage. The second key component is the rectifier circuit to convert AC voltage into DC voltage, to power the destined device. There are other RF energy harvester systems where the antenna and rectifier are combined into one element called the rectenna.

How does an RF Energy Harvester Work?

The overall functioning goes as follows: The RF waves in the environment are captured by the antenna. The incident RF power is converted into DC power by the rectifier circuit and the matching circuit ensures that maximum power is delivered from the antenna to the rectifier circuit. Lastly, the energy storage unit acts as a power reserve for durations when external energy is unavailable.

It is a transducer device that captures RF signals and converts them into AC voltage. An efficient RF energy harvester has an antenna with a small size and a high antenna gain.

This is a resonator circuit that operates at a designed frequency to maximize the power transfer from the antenna to the load. It reduces transmission losses. In an RF Energy harvester circuit or any other AC circuit, there is a maximum transfer of power from the source to the load, when the load impedance (ZL) is equal to the source impedance (ZS).

It is used to convert AC (Alternating Current) to DC (Direct Current). This process is called rectification since it “straightens” the direction of the current. The main component of this circuit is a diode. A diode is a semiconductor device that allows the current to flow in only one direction. Various types of Rectifier circuits can be used, such as Bridge rectifier, Voltage multiplier or rectification can be done by the rectenna. The rectenna, as previously mentioned, is a combination of an antenna and a diode. The most commonly used diode for the rectenna is the silicon Schottky barrier diodes because of their fast switching time. RF energy harvester circuits operate in a high frequency so they require diodes with fast switching times to match them.

A voltage multiplier or doubler circuit is a special type of rectifier circuit consisting of a network of capacitors and diodes grouped into n stages. It provides RF-DC conversion and secondly it amplifies/boosts the DC voltage according to the number of stages in the doubler circuit. The storage unit is a storage capacitor that acts as an energy reserve. 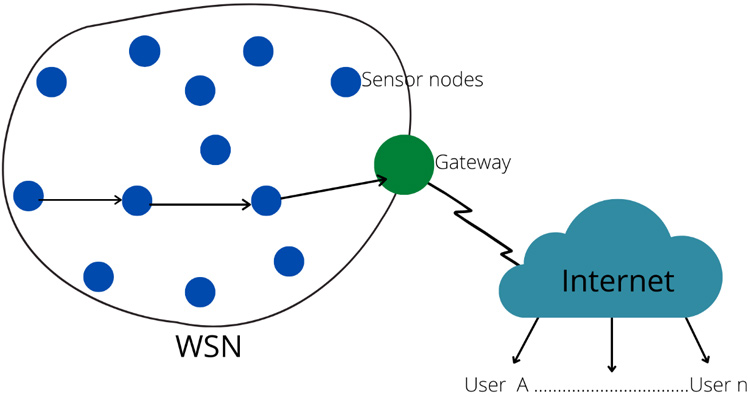 WSN (Wireless Sensor Networks) are interconnected nodes/sensors that can communicate wirelessly to collect data about the environment. The sensors in the network collect data, process it, and transmit it wirelessly to the base station. The RF energy harvester technology allows the sensors to function without power-line connections/ battery replacements. Through this technology, the sensors can self-power by harvesting the RF energy in their environment. This leads to a significant reduction in the costs associated with replacing batteries periodically. Moreover, this type of sensor can be used in locations where battery replacement may not be economically feasible or may involve significant risks to human life.

RF energy is everywhere. It is emitted by sources that generate high- electromagnetic fields such as TV signals, wireless radio networks, and cell phone telephones. The major advantage of harvesting ambient RF energy is that it is essentially “free” energy. This energy can be used to charge portable devices such as wearable electronics, consumer electronics such as headsets, e-book readers, and more. This leads to devices free of connectors, cables, and battery access panels and mobility during charging and using. RF energy harvester technology also leads to improved product design. Products with this embedded wireless power technology can be sealed from environmental conditions such as moisture and user access. Product reliability and lifecycle also significantly improves.

Radio Frequency Identification(RFID) tags are electronic devices that are mounted onto products/animals/humans for remote identification and tracking. If an RFID tag is present nearby, the signal can be picked up by nearby detector devices known as “Readers” after that it can be compared to a central database for identification. RFID technology is used in supply chain management, building security installations, libraries, warehouses, and more. 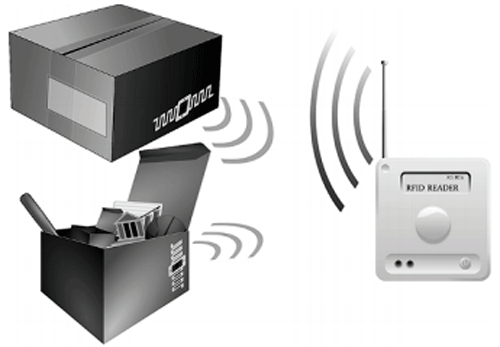 The reader has an antenna that transmits RF signals to which the tag responds by reflecting the RF energy. Active RFID tags, unlike passive tags, require a battery to operate. Using a battery to supply power to the tags gives the user the burden of having to recharge /replace the battery. RF energy harvester can be attached to the active tags, for them to harness the RF waves from the reader and power themselves without the need of a battery.

Internet of Things (IoT) is an innovative technique that connects several devices through the internet. The main goal to do so is to provide an interpretation of the physical world through the internet. IoT enabled devices can listen and perform tasks by operating, sharing information, and taking common decisions with as little human intervention as possible. 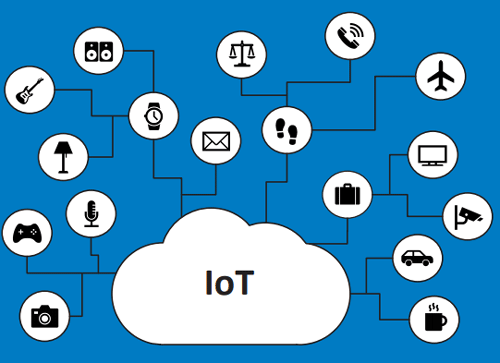 The massive communication between devices in an IoT network consumes a huge power. Energy provisioning for longer network operations without decreasing the Quality of Service (QoS) is crucial. Most IoT networks use cooperative relaying for information exchange between nodes in the network.

Cooperative relaying is a technique where the source and the destination node communicate through one/more intermediate nodes called relay nodes. The advantage of this technique a better coverage and throughput. The trade-off, however, is that network will use more resources due to the additional relay nodes added.

RF energy harvesting technology is one of the best ways to extend the battery life-time and energy efficiency in an IoT network. Instead of powering the relay nodes from the battery in the network, RF-energy harvester relay nodes are used, to self-power from the RF signals in the environment.

In this section, we covered the basics of Radio Frequency Energy Harvester Technology and why it is voted as a replacement for batteries in low-power devices. In a nutshell, RF-energy technology is a technique developed in the last 1950s to convert RF energy to DC voltage. An RF-EH system comprises an antenna, a matching impedance circuit, and a rectifier circuit and storage unit. This technology gained popularity because it is a green energy source that uses “free” RF energy emitted by various sources such as TV, Wi-Fi routers, and cell phone towers. Applications of this technology include, Wireless Sensor Networks (WSN), Charging portable devices, RFID tags, and IoT networks. 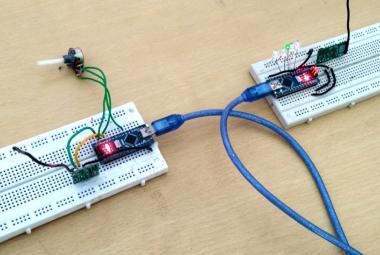