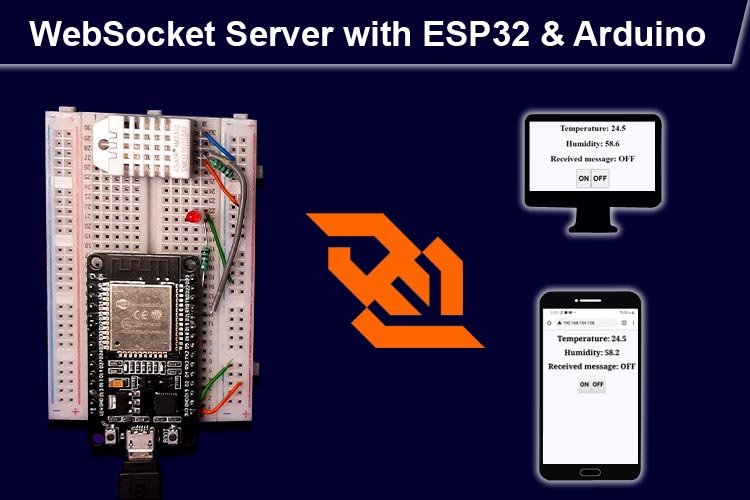 The Internet of Things or IoT refers to the network which is formed with billions of physical devices around the globe that are connected to the internet, all of which are collecting, processing, and sharing data. Thanks to advancements in IoT-based technology that nowadays, it’s possible to turn anything into IoT enabled Application. Though there is much IoT-enabled hardware available in the market, one of the most commonly used ones among professionals and hobbyists is the ESP8266-NodeMCU module or the ESP32 Module.

Speaking of ESP-based modules, one of the common configurations used is the simple ESP based webserver, but there is a problem with this simple ESP-based web server. It runs on Simple HTTP requests and requires you to completely refresh the webpage in order to get any updated data.

So, in this article, we are going to solve this issue by making a webserver with ESP32, which will be running WebSocket communication protocol, which will notify all the clients when changes occur and the webpage will be updated instantaneously. We can use ESP32 WebSocket Server for stable communication between two ESP32.

Back in the dark ages of WWW (World Wide Web), anytime you wanted to update anything on a webpage, you had to call the server and make a completely new webpage (even if it was just a dot). It was not like you go in and get a webpage! You had to make a whole new connection to the server, then the server used to respond with OK, after which you used to get connected.

Now, you have to send a request to the server, the server then sends back the data, and when it does, you have to close the connection to update your webpage. This is commonly known as an HTTP request. And this process is super slow. But, back then people used this method to communicate with the server. 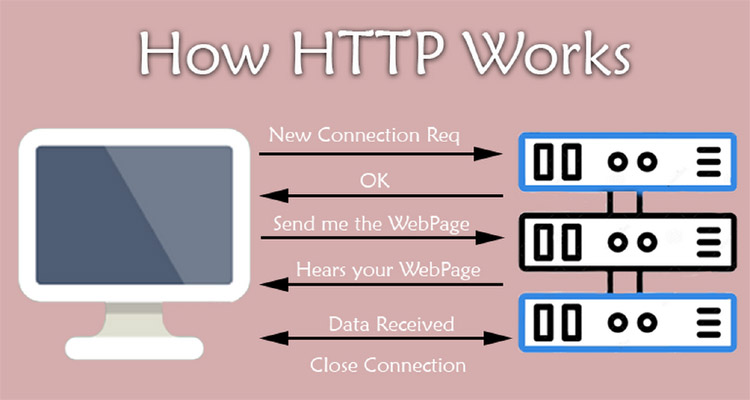 Then, Microsoft had the idea of XMLHTTP started in 1999 request, the developers of Outlook Web Access for the Microsoft Exchange server created it. After that, they started shipping the second version of the library with internet explores 5.0. This is how AJAX worked. This is how Gmail was able to list your email and update them as they arrived. This is how Facebook can update your likes and comments without reloading your webpage and much more. Now, once you establish a connection and you have your webpage. You can update any part of it without closing the connection. This was how it was before W3C introduced WebSockets. 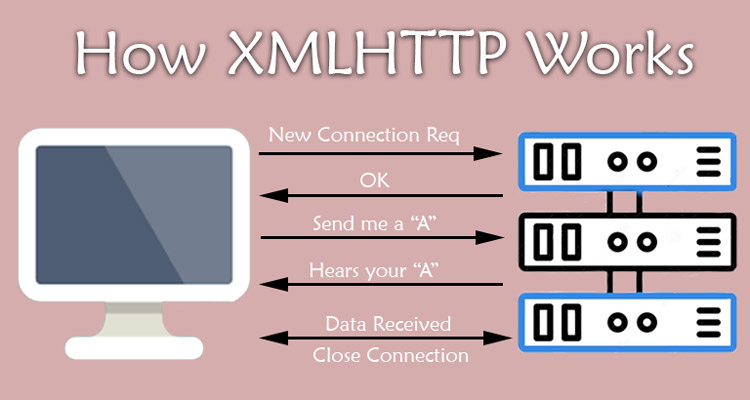 With WebSockets, you have to do the basic HTTP request thing again, but when you need to update your webpage, you just need to open a WebSocket port from the server, which takes very little time and makes the process very easy. 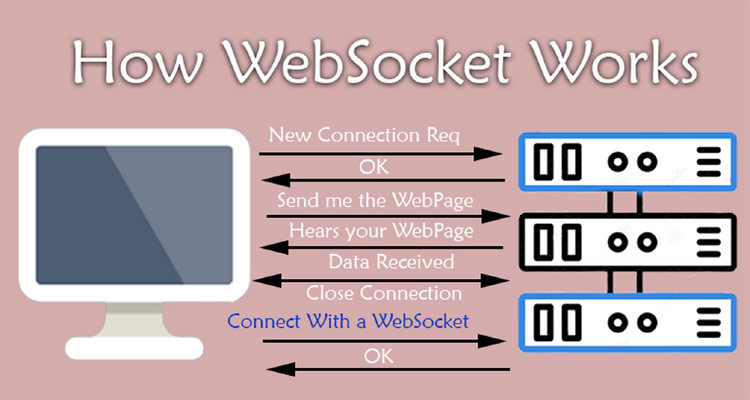 Now, we know the basics and we can move on to the actual part where we will make our WebSocket server with esp32.

The circuit for the Arduino and ESP32 WebSocket Server consists of very basic components that you will be able to find in your local hobby store. When you have accrued all the components, it can be easily built at home without any complexity. 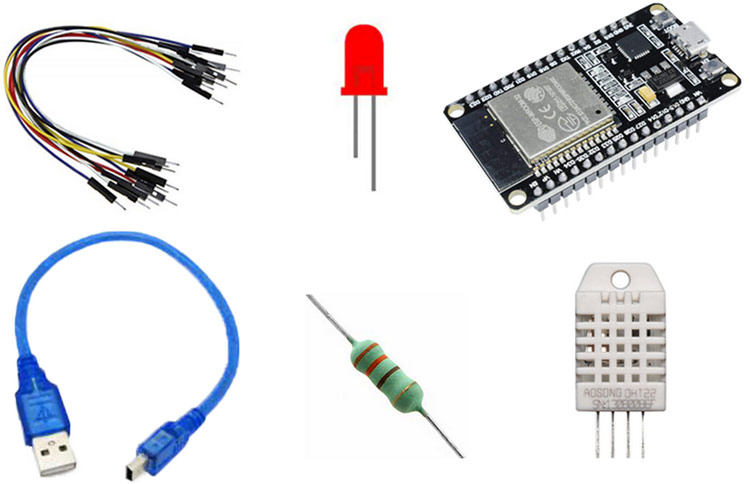 The complete Schematic diagram for the Arduino and ESP32 Based WebSocket Server Test Circuit is shown below. 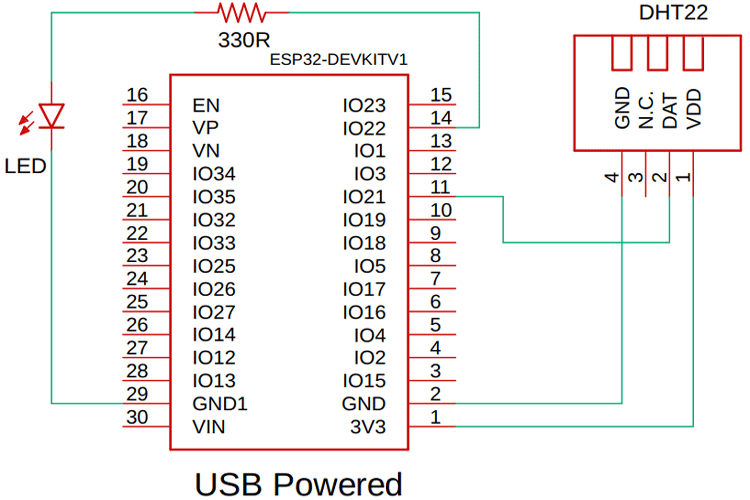 As you can see in the above diagram, the brain of this project is the ESP32 Dev Board. The circuit is as follows. We have connected an LED to pin 22 of the ESP32. We have also connected a DHT22 temperature and humidity sensor with pin 21 of the ESP32. To test the circuit, we will power it from the USB.

How does the ESP32 Based WebServer Work?

The following image shows what happens when the server needs to update the temperature and humidity data. 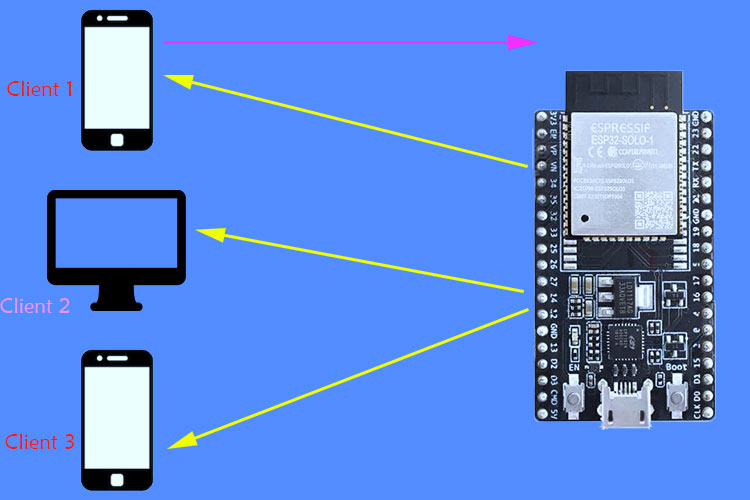 To access this web server, first, you need to type in the IP address of this server. In the webserver, you can see the temperature and humidity data from the DHT sensor and you can also see the toggle button for the LED.

Now, if you open the webpage to other devices, you can see the DHT sensor data updates automatically on your other devices. Now, if you click on the toggle button on any other device, you can observe on the other devices, the changes take place simultaneously. For better understanding, you can watch the video given at the end of the article.

We start our code by <! DOCTYPE html> declaration, which is used to inform the browser that the document is an HTML document. Next, we define all the parameters for the head with <head> </head> tags. Inside the head tag, we give it a title and set the setting for viewpoint and scale. Next, to add some CSS, we add the <style> </style> tags inside the <head> tags.

Next, inside the <body> <\body> tags, we have created some heading with the help of <h1> </h1>. In these headings, we will show the temperature and humidity data from the DHT22 Sensor, we will also able to see the status of the LED in this section. To turn the LED on and off, we have added two buttons, one is named on and another one is named off.

Next, we have to implement through which all the WebSocket action will happen. We start of our script with the help of the <script> </script> tags. In the script tags, we first declare a variable that will hold the socket object. Next, we add two addEventListener() that will be called when any of the two corresponding buttons are pressed. Next, we declare a function init(). This function will be called when the HTML page is loaded. Inside the function, we have defined the Socket.

As we have declared it as a new object, our socket is now a WebSocket that will be able to connect to our ESP32 server and can get the data. In WebSocket('ws://' + window.location.hostname + ':81/'), you can see, this line asks to connect to a web socket server with the IP address on port 81. With the help of an onmessage event, we create a function. Each time an update is received, the onmessage event occurs. This event will call our function processCommand(). Inside the processCommand() function, we parse the incoming JSON and we put its value in its respective places. The last two functions, button_1_pressed() and button_2_pressed() events occur, and when that happens, 1 or 0 is sent through the WebSocket.

That marks the end of the front-end code. Now, we can move on and understand the code in Arduino IDE.

But before moving to the Arduino side of things, we need to convert the whole webpage to a string, because, in the Arduino IDE, we will be saving and uploading it as a string. For that, go to textfixer and compress the HTML. This will make it a string. The image below will give you a better idea of the process. 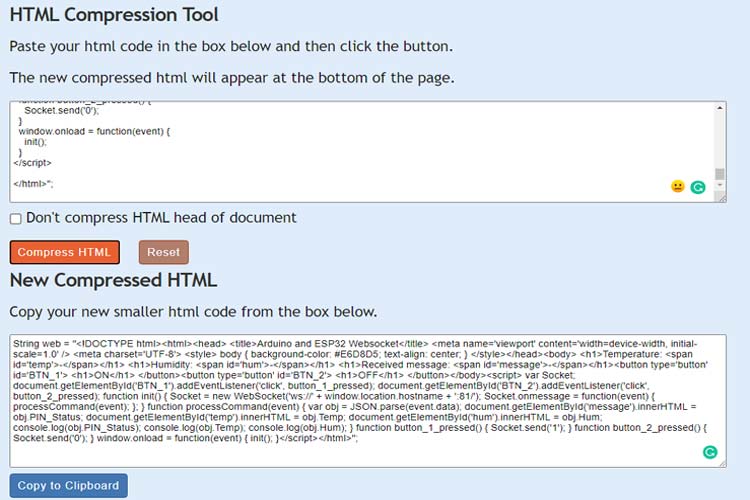 To compile the code in Arduino IDE, first, you need to download some WebSocket libraries with the help of the board manager method or you can use the links given below.

Once all the libraries are installed, we need to include them in our Arduino code.

Next, we define the type of DHT sensor and the pin we are using to connect to it.

Next, we define the SSID and Password for our network.

We will be using the mills() function to update the temperature data in a certain period, so we need to declare some variables.

Next, we declare a String type Variable web in which we will store the whole webpage. The content of this string type variable is what you will be seeing on the webpage.

Next, we again declare some String type variables to store some valuable data.

Next, we create instances for our DHT sensor, webserver, and WebSocket server.

The function update_temp_hum() is to update the temperature and humidity data.

This marks the end of our coding section. For testing and demonstration of ESP32 WebSocket Server, do check out the video at the end of the article. If you liked the article, let me know in the comment section below. 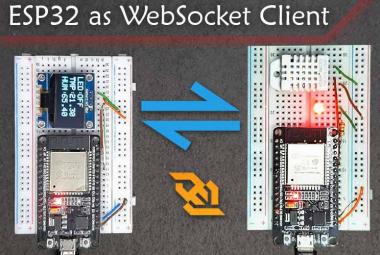 Code with many typos, thank…

Code with many typos, thank you

Really? Did you come here to…

void greatArtical(void){
// people need to be more thankful and less critical TODO: post this..
}
/* RANT
Really? Did you come here to for a spelling bee?
No, this is a post on how to implement WebSockets. We're tech people, we can't spell. It's how we are wired. But with kind hearted souls like this author, we learn to code better. A computer doesn't care if we say heres or here's.*/
// A computer cares about the format of code();
void main(void) { //RANT OVER
if(HERES || !HERES) {greatArtical();}
}

Well done, I have been…

Well done,
I have been looking for a web socket solution like this for some time. Like the previous comment, I too am put off by the negative comments. I’m looking forward to monitor and control solutions I can do with this code. Thank you.

In which version was your…

In which version was your Arduino JSON Library?

Mine is 6.19.4, by Benoît Blanchon, the latest you can find in Arduino IDE

I noticed the client ESP32 doesn't react as quickly as the client browser (web page). Is it normal ?

Moreover It work well with "router AP" but when I tried to use an soft AP on a third ESP32, the client don't receive the values.
Have you an idea ?

Thanks for your answer.