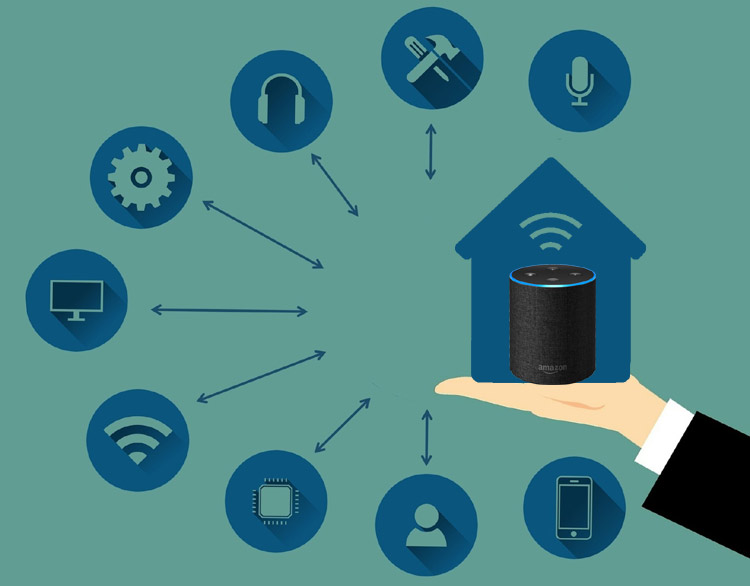 It’s been almost three years since Amazon released the Amazon ECHO voice controlled speakers and the popularity of the speaker has continued to soar because of astounding performance of the Alexa Voice Service, and the fact that the platform was opened up to developers has led to the development of Alexa compatible devices by top electronics manufacturers and the birth of several Alexa/Amazon echo based tech start-ups.

There are many Alexa enabled smart lightings are available in the market but they are a little bit costly, so here in this tutorial we learn to build our own Alexa controlled Light using ESP12E NodeMCU. In this Alexa controlled home automation project, we will emulate the WeMo switch by using ESP module.

WeMo is the name of series of IoT products developed by Belkin company, it mainly include WeMo switch which can be controlled from anywhere over internet. So connecting any AC appliance with WeMo switch makes that device IoT enabled. IoT based Home automation is very popular nowadays and we have previously done many IoT Home Automation Projects using different controllers like Raspberry Pi, ESP8266, Arduino etc. 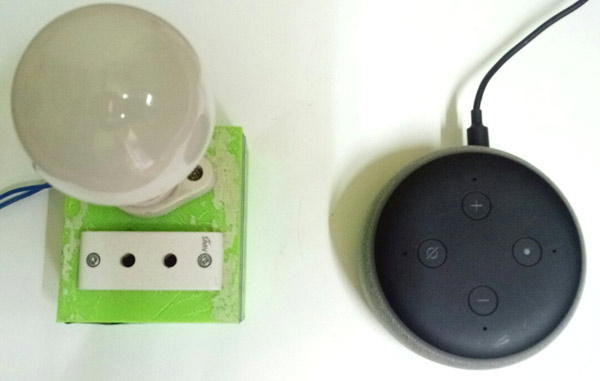 Connections for this Amazon Echo controlled Home Automation is shown below: 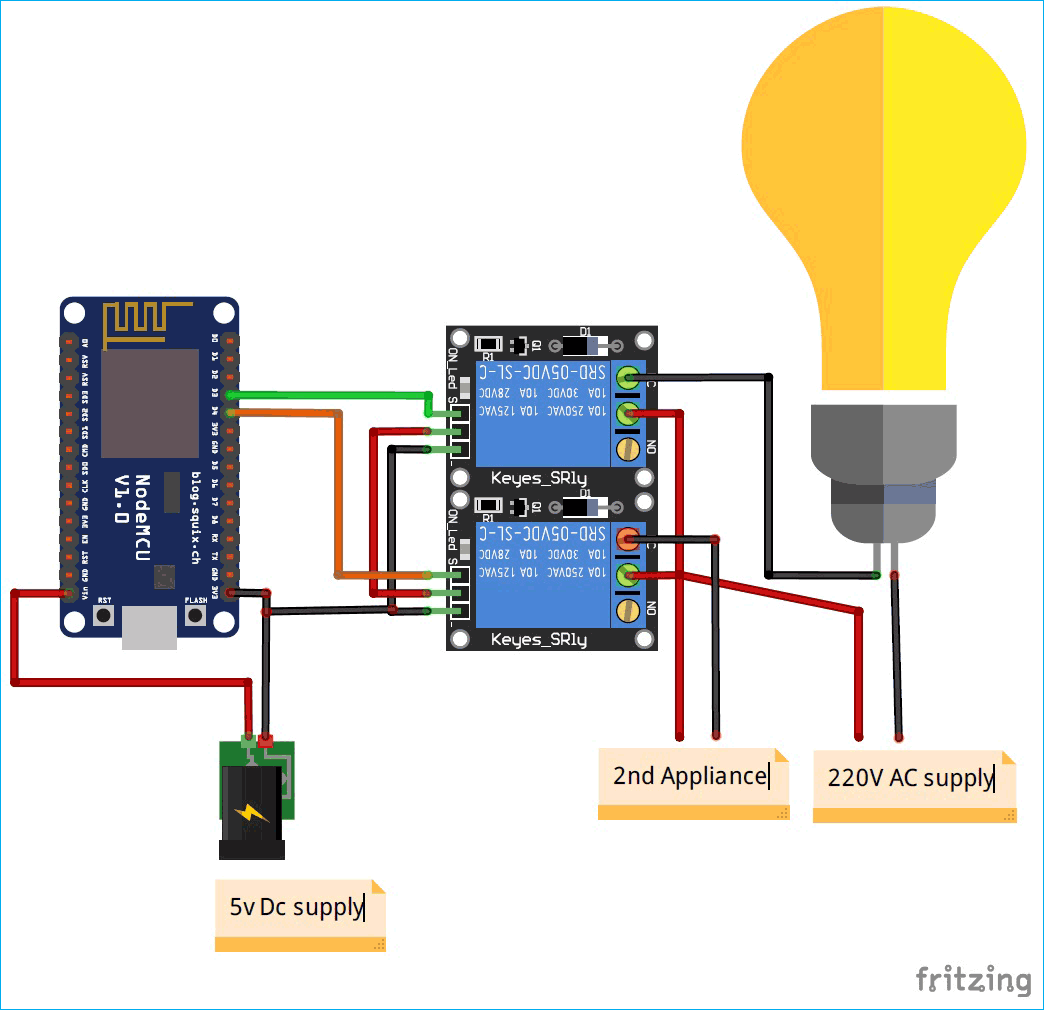 Here two relay modules are connected to NodeMCU to control two Home appliances. A 5v power supply from an adaptor or 5v AC to DC converter can be used to power the circuit. I am using HiLink 5v SMPS to provide power.

The whole setup is assembled in a 3D printed box to give it a smart appliance board look. There is a bulb holder and a socket to plug an appliance like TV. The assembled box is shown in the image below. 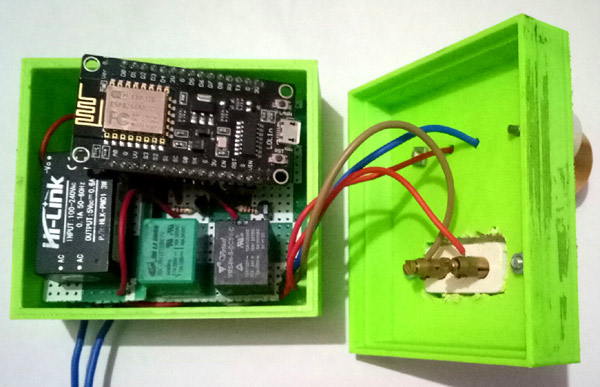 There are several methods from which we can control our ESP. They are listed below with features

Here in this tutorial we are using this virtual switch emulation technique so lets see this method in detail.

The WeMo devices use UPnP (Universal Plug and Play protocol) to send and receive data over the network. We can easily track this communication between device and Wi-Fi network using Wireshark network tool. Wireshark is used to collect packets while the communication takes place between WeMo device and Echo dot speaker. Developer found that Device Detection Function starts with the Echo searching for WeMo devices using UPnP. Then the device responds to the Echo with the device’s URL using HTTP over UDP. Echo requests the device to send the description of itself in HTTP format.

Now, Echo detects the device and establishes a connection. The Echo and the WeMo connects over the HTTP and issues a “SetBinaryState” (On/OFF) command. Then WeMo takes that command and sends a confirmation via HTTP. The complete flow chart emulating a WeMo switch using Alexa is given below 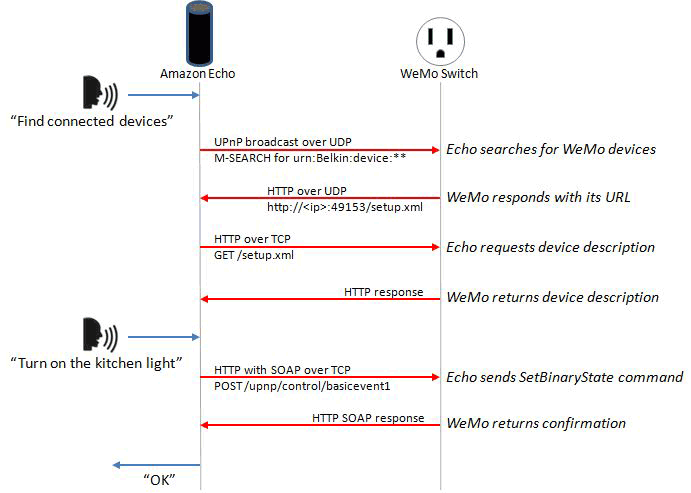 Now, this information can be used to set up our own WeMo virtual cloud. So, a script was made in the same way to emulate the Phillips or WeMo devices by developers and can be used with any ESP device.

FauxmoESP library is one of them which is easy to use and emulates Phillips devices. Using this library we can make many virtual devices and control our appliances using Alexa.

So here we are using virtual switch emulation technique as it is easy to implement and need less coding.

As we will create multiple virtual connections environment on ESP so we need to install fauxmoESP along with Asynchronous TCP library.

3. Now, unzip these files in libraries folder in your Arduino directory which can be found in Documents folder. Also, rename these folders as oseperez-fauxmoesp-50cbcf3087f to xoseperez_fauxmoesp and ESPAsyncTCP-master to ESPAsyncTCP.

4. There is an example code in fauxmoESP for controlling appliances we have to modify this example. Open Arduino IDE and go to Examples -> FauxmoESp -> fauxmoESP_Basic. 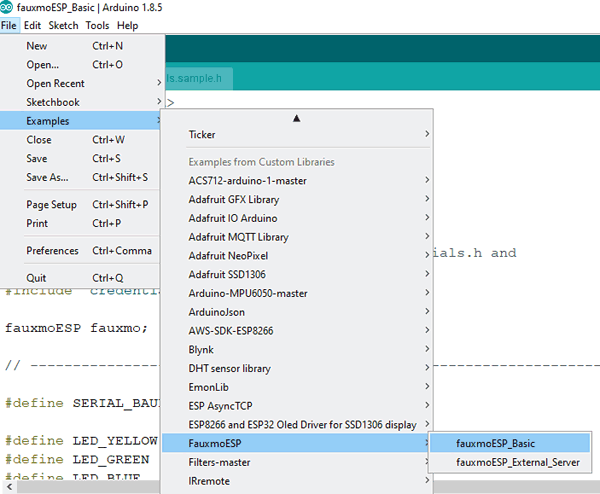 Before starting with the coding part, make sure you have installed ESP board files. If you don’t have board files then follow our previous tutorials on getting started with ESP using Arduino IDE.

Complete code with a working video for this Alexa controlled Home appliances is given at the end of this tutorial, here we are explaining the complete program to understand the working of the project.

Define baud rate of 115200 and Wi-Fi-SSID and Password. Also, make an instance for fauxmoESP as fauxmo so that we can use this in our code.

Make a separate function for Wi-Fi setup so that it can be called in void setup function. Make the WiFi mode as station mode and pass the SSID and Password in WiFi.begin() function. Wait for the connection to establish and display the IP of ESP.

In void setup() function, pass the baud rate to serial.begin function and call the wifisetup function.

Now, fauxmoESP has to create its own webserver, for this pass true in createserver function, enable function and set port number as 80. If you make false in enable function then it will prevent the devices from being discovered and switched.

Add devices using fauxmo.addDevice() function. The argument will be the name of your device that you will used to ask Alexa to switch it on/off.

Now, make a function when a command is received from Alexa. In this function we will compare the string with the device name when it is matched then change the state of  AC appliance according to the command given.

Similarly, do for the second AC Appliance.

In void loop() function, just check for the incoming packets from Alexa server using fauxmo.handle function and it will take the actions using onSetstate() function .

Finally upload the complete code (given at the end) in NodeMCU after connecting the circuit as per the circuit diagram shown above. Also, note that the Wi-Fi network should remain same for both the NodeMCU and Amazon echo dot.

Select the correct board and port number from Tools menu and hit the upload button. You can open serial monitor in Arduino IDE to see whats happening inside the code. Make the baud rate 115200 in serial monitor. 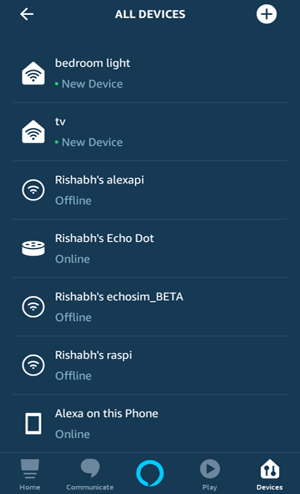 Alternatively, you can discover these devices in your Alexa app. Tap on + sign and then discover devices. You should see two devices namely Bedroom light and TV. 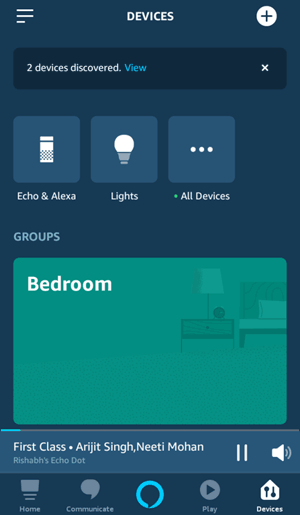 Now we are ready to test our IoT Alexa Home Automation System. So just try saying Alexa, turn on Bedroom light and the Relay one should be turned on.

Now say Alexa, turn off Bedroom light and relay one should turned off. Try giving commands to turn on/off the TV.

You can see the response and state of appliances in serial monitor. 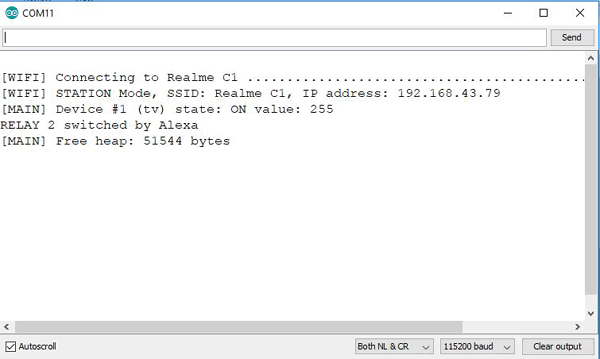 So this is how a IoT based Alexa controlled Home Automation System can be made by emulating WeMo Switch using ESP12E NodeMCU.

Find the complete program and demonstration Video are below. Also check other Iot based Home Automation Projects. 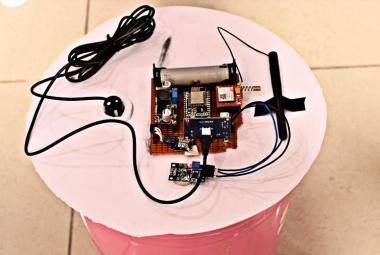 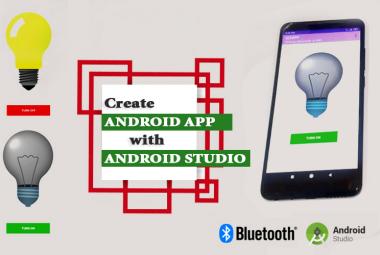 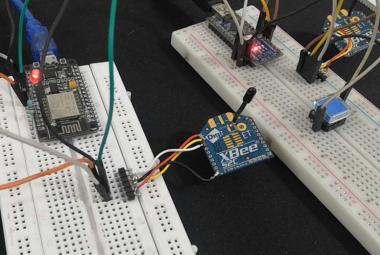 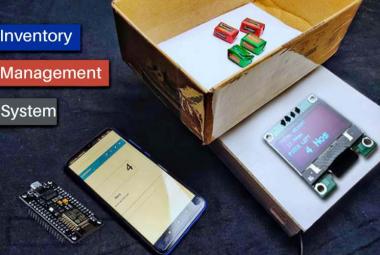 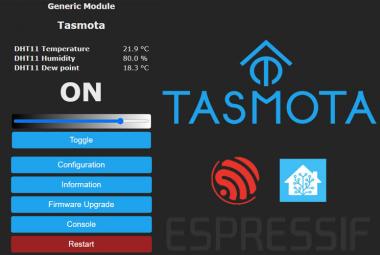 Getting Started with Tasmota on ESP8266-01: Control LED, Read DHT11, and Integrate Tasmota with Home Assistant 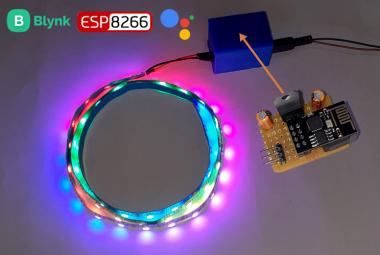 hello, can we add two more…

hello. please tell me how to…

hello.
please tell me how to control 4 ch relay with this code

You just need to define your input relay pins in the program and then use digitalWrite() to control them. For example we only defined one pin in this program but you can define all the pins for 4 channel relay like:

Hello, First of all thank…

First of all thank you so much for giving this tutorial.

I Have problem using the…

I Have problem using the auxmoESP.h library. I received the error "device is not compatible with the requested value".

To solve this error, e used other library named ESPALEXA.h Some minimal change was necessary in code..

I believe need some update in library fauxmoesp in function "callback" is necessary.